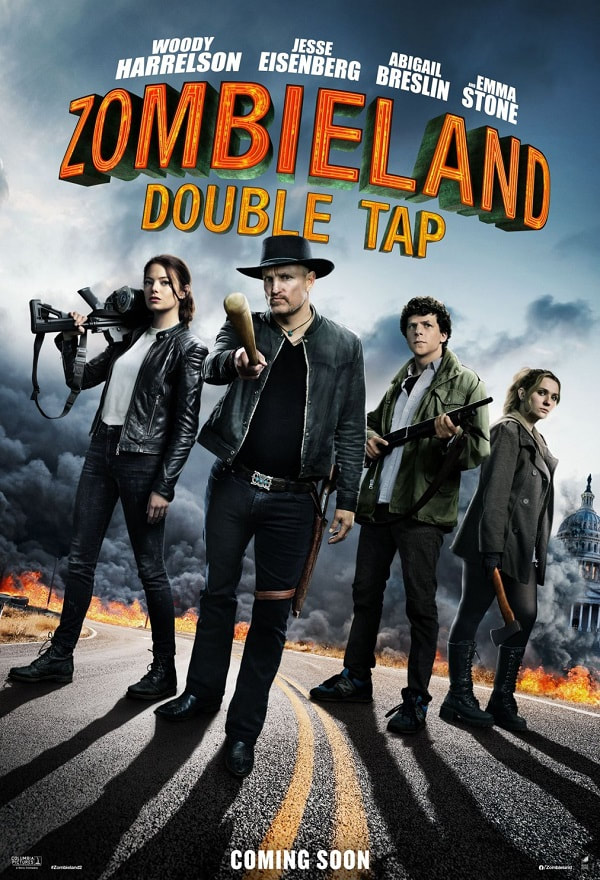 Zombieland: Double Tap Story: This sequel picks up ten years after the events of Zombieland (2009).

Zombieland: Double Tap Review: It’s been a decade since Tallahassee (Woody Harrelson), Wichita (Emma Stone), Columbus (Jesse Eisenberg), and Little Rock (Abigail Breslin) met. They’ve had enough time to hone their zombie hunting and killing skills over the years and are now pretty good at it. Not only have they identified different types of zombies, and how to work as a team, they even see themselves as a family. But, familiarity breeds contempt, and after spending so much time with each other, they begin to realise they’re not as close-knit. This causes problems as the four make their way across a zombie-infected United States in search of a place to call home.

Not many sequels can justify their existence, let alone be good. ‘Zombieland: Double Tap’ eliminates any signs of sequel fatigue by taking what made the first film work, building on it, and throwing some curveballs along the way. Previously, one of the most fun aspects was the chemistry between the four lead actors, and there’s no shortage of it this time around either. Harrelson, Stone, Eisenberg and Breslin pick up right where they left off without missing a step. They work incredibly well with each other, but the one who stands out is the trigger-happy

Tallahassee played with calculated abandon by Woody Harrelson. Rarely does a politically incorrect character end up being hilariously endearing; Harrelson knows precisely where to go overboard and exactly when to reel it in. The new cast additions are slightly hit-or-miss – Rosario Dawson as Nevada is the female version of Tallahassee, but Dawson manages to fit right in. Zoey Deutch plays it up as the stereotypical dumb blonde Madison and may end up being a new favourite. Avan Jogia doesn’t find the same success as the formulaic hippie Berkeley.